Silvio Lacasella, was born in Trento in 1956 but very soon he moved with his family to Milan, to then settle in Vicenza where he still resides.

Here he has his first solo show, at the Virgilio Scapin Library-Gallery. E’ thanks to his friendship with Tono Zancanaro who, in 1977, deepens the engraving technique, to which he devoted himself almost exclusively until 1989, accomplishing approx 350 slabs. During this time he exhibited his sheets in public and private spaces, in Italy and abroad.

Among the most significant, we remember the exhibitions at the Don Quixote gallery and Incontro d'Arte in Rome, in the engraving gallery in Milan, at the Il Triangolo di Cremona gallery and at the Tempietto di Brindisi. In 1989 the Galleria dello Scudo in Verona and the Modern Art Gallery of Palazzo Sarcinelli in Conegliano Veneto exhibit his engravings alongside the paintings by Velasco.

The main exhibitions held in recent years were held at the Sanseverina in Parma (1989 e 1990) presented by Fabrizio D’Amico: at Bocconi University in Milan (1990); at the Ghelfi of Vicenza (1990, 1993, 1996) with writings by Roberto Tassi and Nico Stringa; at Forni in Bologna (1991, 1995); at the Orange Gallery in Grottammare, Ascoli Piceno (1992) with writings by Flaminio Gualdoni, Valerio Magrelli and Franco Marcoaldi, on the Island of Rome (1992); at Palazzo Crepadona in Belluno (1992), with a presentation by Elena Pontiggia, to the Cremona Triangle (1993); at Banca Intesa of La Spezia (1995). At Villa Valle di Valdagno (Vicenza) exhibits together with Pompeo Pianezzola and for the occasion a catalog is printed containing writings by Fernando Bandini, Fabrizio D’Amico and Emilio Tadini (1996).

In 1997 exhibits at the Municipal Theater of Lonigo (Vicenza) and at the San Pantalon in Venice. Always in 1997/8, accompanied by a catalog presented by Franco Marcoaldi (with a testimony by Piero Guccione) exhibits at the Innocenti Arte gallery in Montecatini Terme, at the Orange printing house in Grottammare (Ascoli Picenco) and the Isola di Trento gallery. Also in May of 1998 exhibits at the Avogadro Tower in Lumezzane (Brescia), a conversation with Marco Vallora is published in the catalog. In September of 2000 the Banca Nazionale del Lavoro includes some of his paintings in the exhibition "B.N.L.: a bank for art beyond patronage " (Roma, Tempietto del Bramante). During the month of November of the same year, his paintings are exhibited at Lorenzo Ghelfi in Vicenza and at Ceribelli-Albini in Milan.

In December of the same year he was invited to the “Images. Italian art since 1942 to the present day", organized in Frankfurt jointly by the Bank of Italy, who acquires his paintings, and the European Central Bank.

The personal exhibition "Dante's Inferno and other nocturnal landscapes", curated by Giorgio Segato, is presented at the Museo Civico del Santo, a Padova, during the month of May 2001. In October he exhibited at the Trentasette gallery in Palermo, is between 2002 e 2003, Inter alia, a Stresa, Conegliano, Cremona. Always in 2003 presents for the first time his paintings dedicated to the theme of’ “Water” at the Mill 503 of Vicenza.

From 2003 his personal exhibitions are interrupted. Instead, there are numerous group exhibitions, both painting and engraving: among others, the "Leonardo Sciascia Engraving Award" (traveling exhibition), the exhibition “Art in Italy, 1968-2007”At Palazzo Reale in Milan, curated by Vittorio Sgarbi, the exhibition "Painting of Italy. True Places and of the Soul "organized by Marco Goldin at Castel Sismondo in Rimini, or “A certain idea of ​​painting” at Palazzo trentini in Trento, to name a few.

From 2004 is called to hold annual painting courses at the Accademia Cignaroli in Verona. From 1979 collaborates with art articles on the cultural pages of the "Giornale di Vicenza". In 2009, exhibits a large selection of his engraving and painting works in a solo show in Vicenza, in the spaces of the Lamec, (Promoted by the Municipality of Vicenza). The exhibition is accompanied by a catalog containing texts by Fabrizio D’Amico and Marco Vallora. 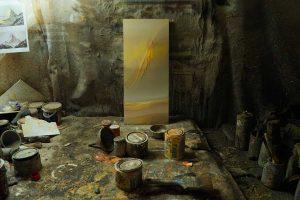 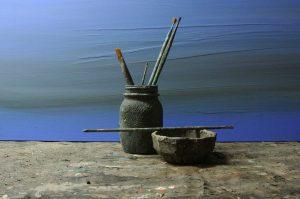 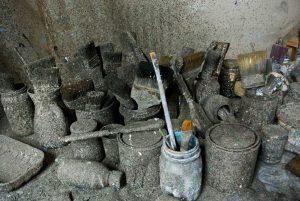 Looking at me a few, very few things: the distant line of a horizon, the sudden change of a light, some water reflections, the black of an inner night. In these places not places, I always get lost, holding my painting by the hand. but yet, in this way, just by being alone, I can look more sincerely inside myself. What I often see are just fragments of what surrounds me, I struggle to find what I want instead. It helps me little to try to follow some more secret and profound tracks. in the meantime, for years, I paint the absence. In fact, I realize that what in the end I am stubbornly portraying is precisely the unreachable. Figuration and abstraction can only dialogue. That it is completely true that art is a kind of mirror to better understand ourselves? Or is it possible, as it seems to me, than it, while considerably widening the thread on which we walk, you lift it up dramatically? 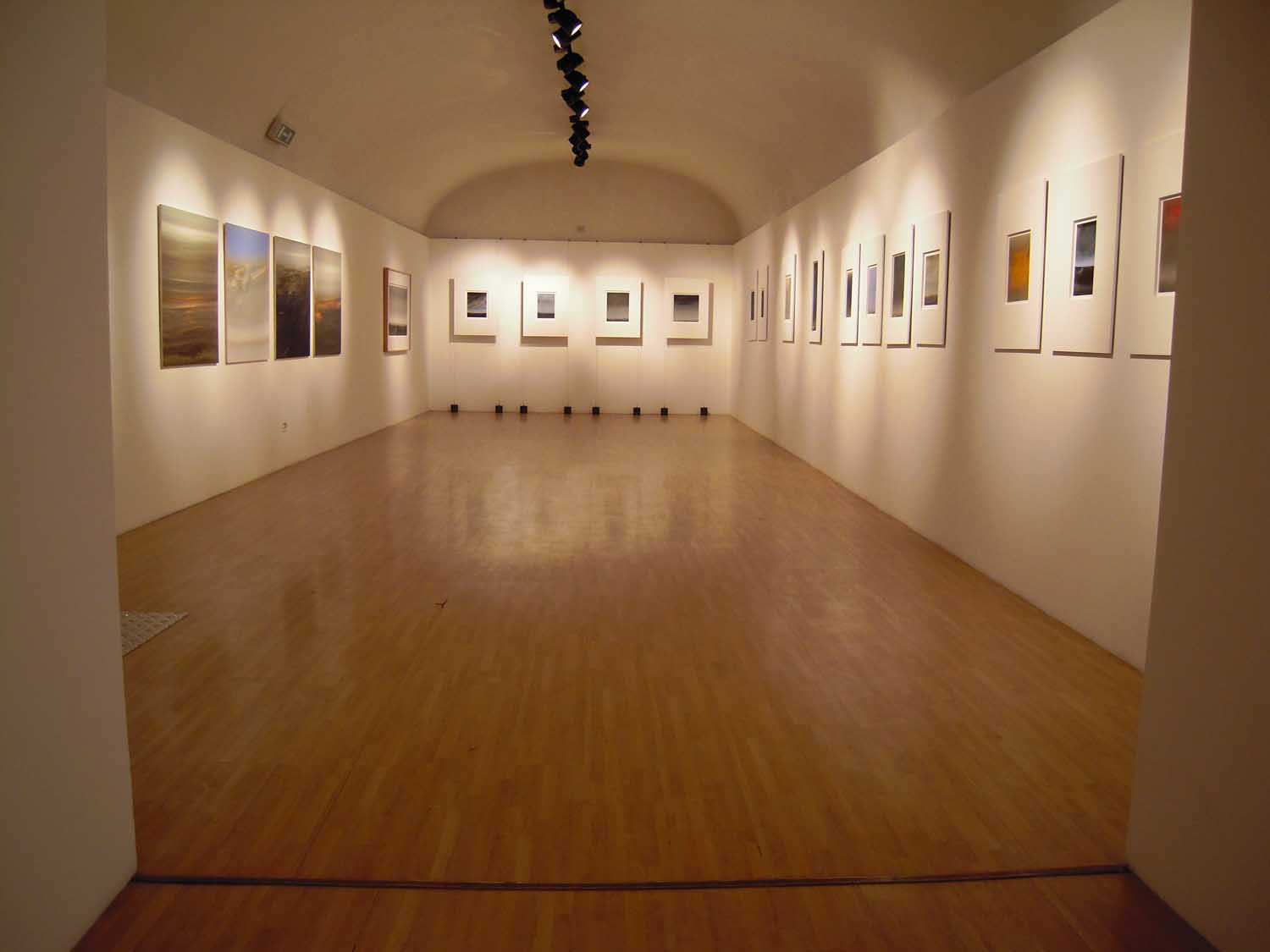 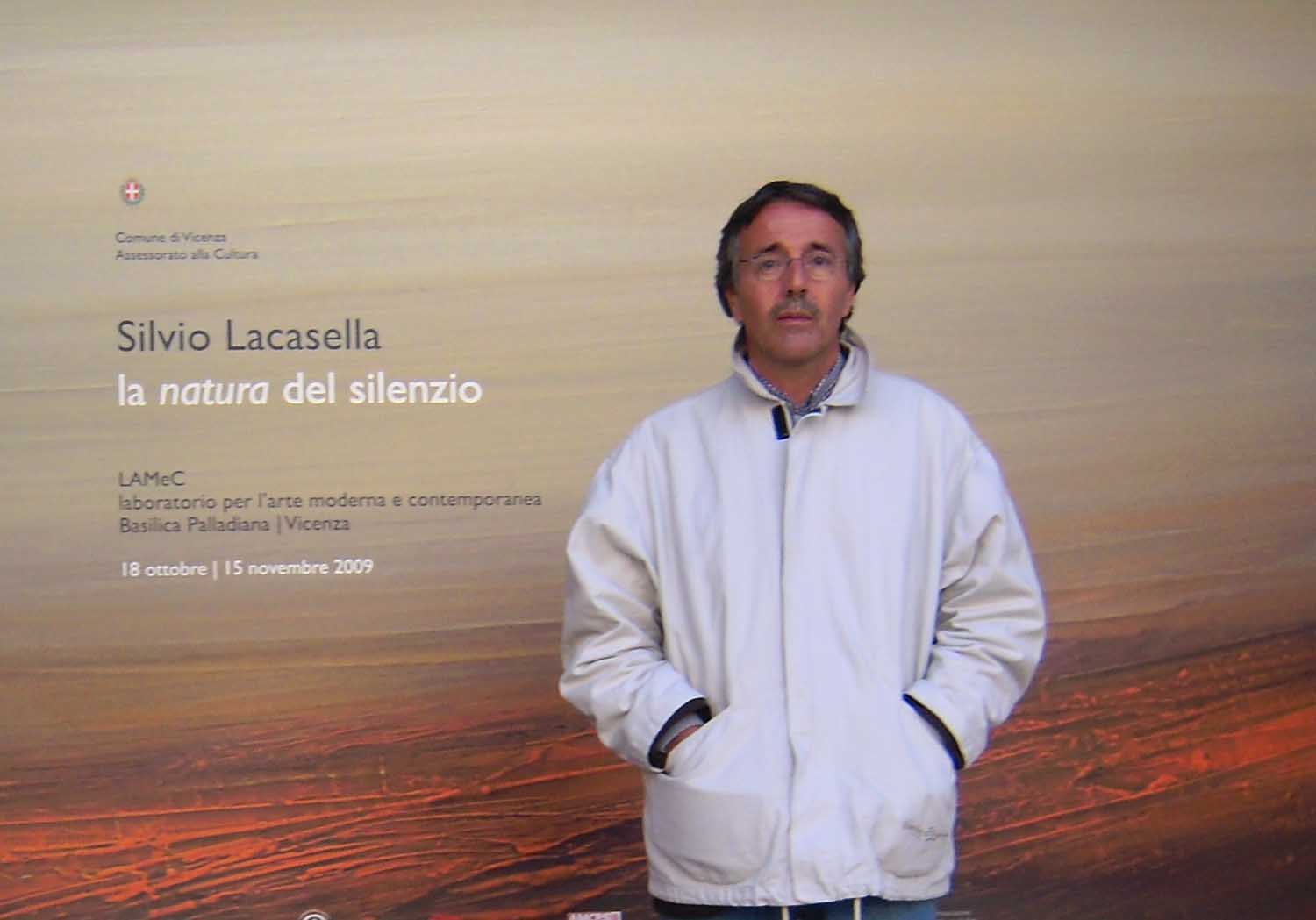 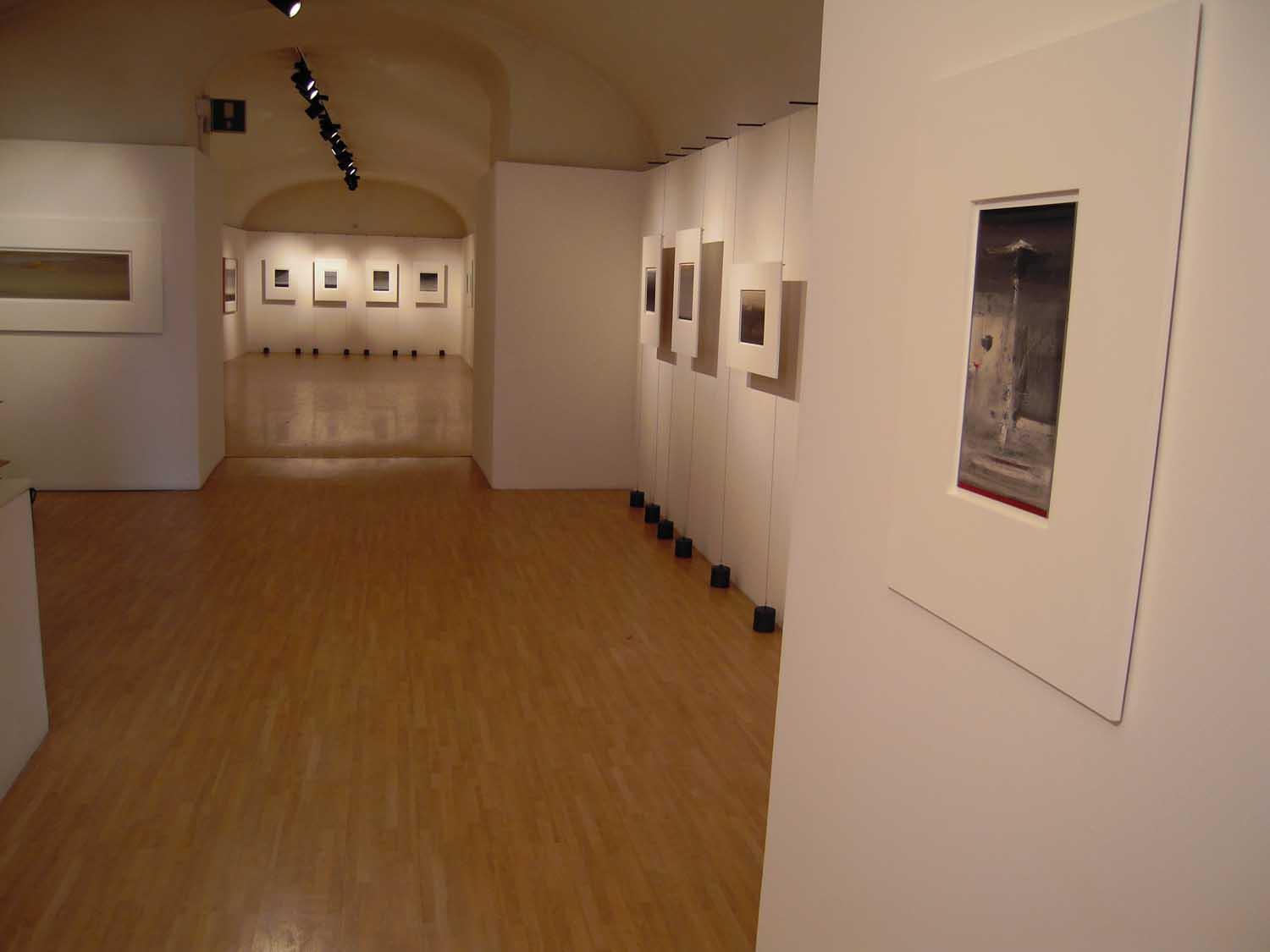 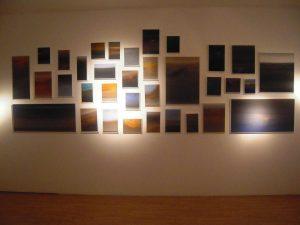 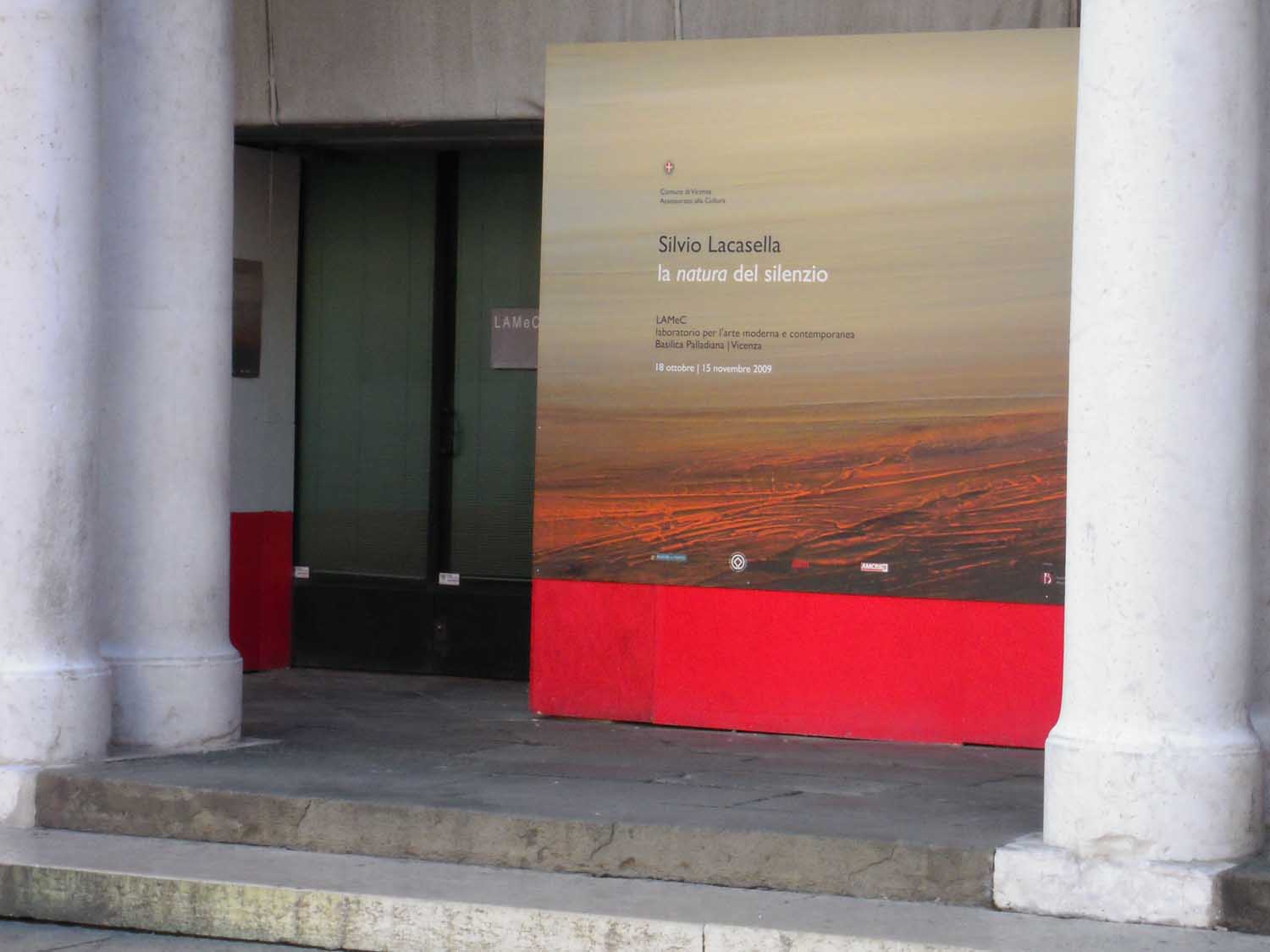 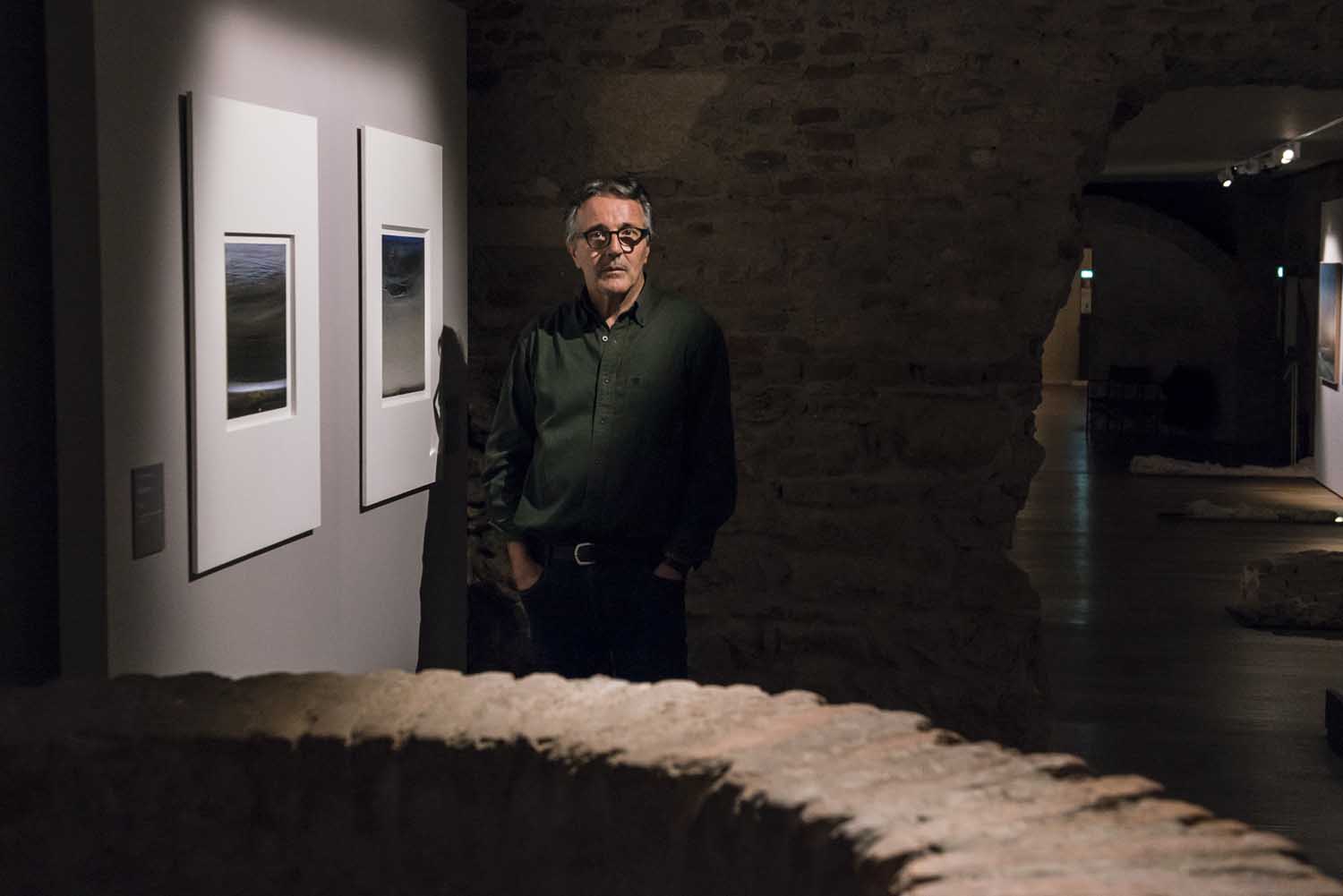 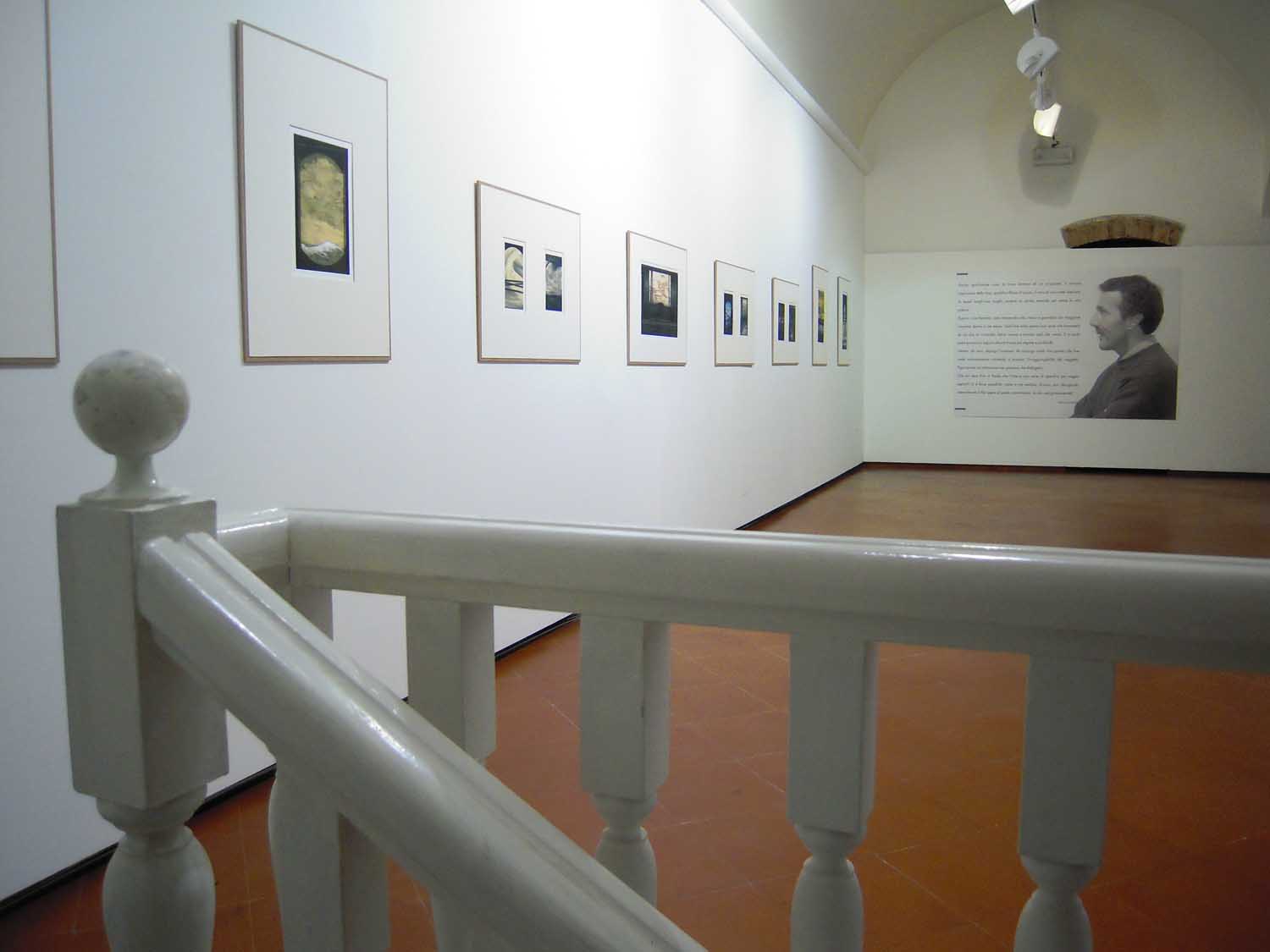